A win32 logical game for 2 players

If you'd expect a scientific program from the name, I'll be disappointed. It's a logical game, which was (as far as I know) created for 8-bit computer ZX Spectrum for the first time. Because I didn't like stupid windows logical games, I decided to create my own - and I've done a remake of that ZXS game. But I couldn't remember, what was the original name - so I named it like this. And what's this game about? It's about atoms smashing! (read the manual for more infos). Currently, the game is just for two players and doesn't contain digital opposite (i.e. AI) and also can't be played through net. However, I think that this game will entertain you for min. 15 minutes (and if you get a good counter-player even more). You know why? Because this game is a bit different against other games - you can win it by just one step (and also loose)...

Here's a small preview of game: 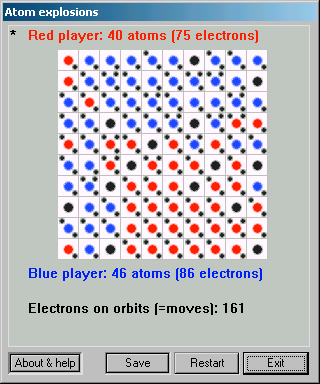